It's been a while between news updates, but I've changed some things around with this news stuff so it will be easier for us to post more regularly. So for now, because I can, a quick reminder: the 20th April is basically here! Hope you can record a song, then please follow the instructions here. Proper updates soon!
19 April 2008 | 0 Comments | Tags: this site, 20th

The Cabinet Pin 2007 end-of-year compilation is up at last, and is called Goodbye 2007. 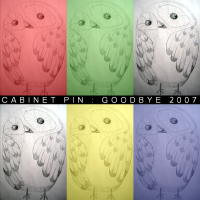 It has fantastic(!) new songs from Brave Radar, Bagley, Commas & Dots, The Saw Had Eyes That Sea, Fairy Light, Kane Black, Starlings in Snow, The Desks and Community Musk (who are all previous contributors to the 20th project).

Head to the compilation and download the songs and some fancy CD artwork. Farewell the year in style!

Hey. Long time no see. Here's a new CD-R from The Desks. It's called "The Same Mistakes" and has 28 old songs, all recorded for previous months of the 20th project.

This CD's for trade, so if you have any of your own recordings lying about, let's trade! thanks.

Say hello to the new debut self-titled album by Community Musk! It's called "Community Musk" and it's full of songs: real hard-working songs, folky with words and guitar and a real warmth.

And then, oh who's this? It's RainBoat's album "Spacebird IV", a concept album about a spaceship and ancient codes and environmental disaster. It's a collection of songs recorded by Rainboat for the 20th project, over the months.

Fisheads of Fun have The Album

Hooray! it's online! Richard kindly said that we could upload the debut Fisheads of Fun album to this here website! This is one of my favourite albums so far this year. Some of the songs are full of unpredictable fun (that's the best kind of fun). Other songs are dark and slightly scary. Others can't be explained.

A record label kind of thing in Sydney, Australia.